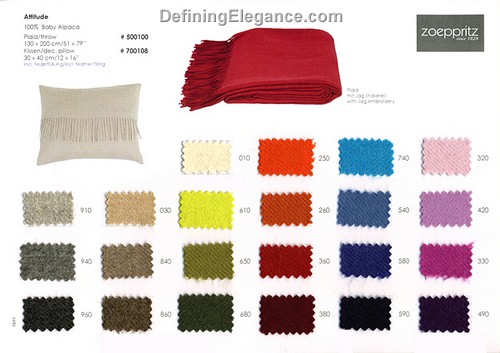 Since 1828, Zoeppritz has been offering the world fabulous blankets in natural fibers.  The Attitude throw and decorative pillow from Zoeppritz is their newest introduction made from “baby” alpaca, the most rare and finest classification of alpaca fiber.   Known to be incredibly soft to the touch, the alpaca fiber is extremely strong, yet lightweight and warm. Available in 22 luscious colors, the Attitude collection has a color to suit most any decor or color scheme.  The throw measures a generous 51 x 79 inches and the pillow is a boudoir size at 12 x 16 inches.  Both throw and pillow have fringe detail. 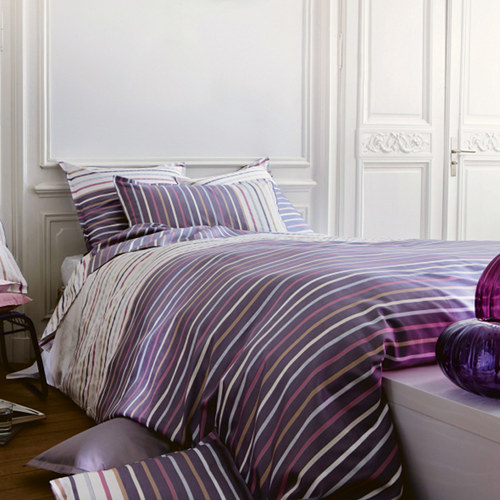 Vogue is a 300 thread count 100% Egyptian cotton sateen print from Alexandre Turpault.  This bedding collection is perfect for contemporary decor with its striking palate of purple, white, meringue, wisteria and peony. Go for bold with plum colored walls and mirrored side tables to create a glamorous setting or go with light colored walls to allow this bedding to pop.  Either way, creating a bed with crawl-in comfort opens the way for many possibilities to design a comfortable haven for starting and ending your day.  Available in a duvet cover, flat sheet, and shams. Made in France. 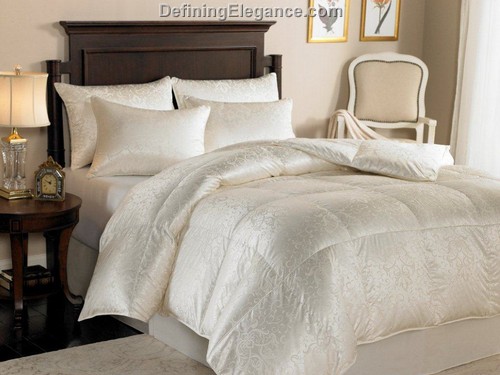 Eliasa down comforters and pillows from Downright are the ultimate in luxury.  Filled with an exclusive 920+ Canadian white goose down, this comforter is a masterpiece of unparalleled beauty and craftsmanship. Buying a quality down product is a worthwhile investment.  The Eliasa is unequivocally, the finest available as it comes from mature geese bred specifically for their down. As a rule, the higher the fill power, the better the quality –and warmth, because down works by trapping air. This means that a higher quality comforter can weigh less than a heavier lower quality one, yet still provide more warmth—not to mention lightweight comfort. We’re confident that owning an Eliasa comforter will become a treasured heirloom that will be enjoyed for generations to come. 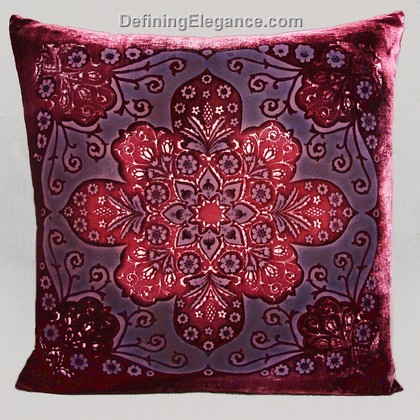 The distinctive motif and vibrant colors of this collection of decorative pillows from Kevin O’Brien Stuido pay homage to the Moroccan style of decorating. It brings to mind the ancient traditions and skilled artistry that has been the eclectic pulse of the Moroccan culture for centuries. Versatile enough to use as visual punch for a dramatic bedroom or to add a decorative touch to a chic and sophisticated living room, the Moroccan velvet pillow makes a striking statement and is sure to spark conversation.

Moroccan is handcrafted in six amazing colors and 14 sizes. Dyes are mixed in customized colors and several layers are applied to give the design its unique appearance. 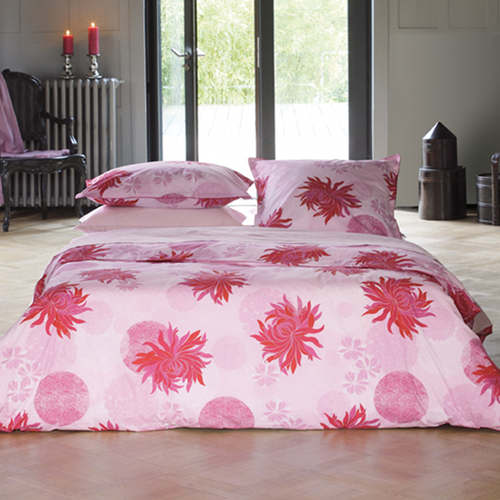 Asian flowers have long been a source of inspiration for many things including home textiles.  The Mae percale bedding collection from Alexandre Turpault expresses the elegance of these amazing floral beauties against a circular patterned background in a contemporary style.  Made with long staple 100% Egyptian cotton, the duvet cover, flat sheet, and shams are available in two colorways.  Choose  Silver, which can be paired with white, silver, steel grey, or black in coordinating sheets for a more neutral setting.  For a feminine touch, select Fuchsia.  White along with light or dark pinks in sheets and bed skirt can give this bedding dramatic impact.  Made in France. 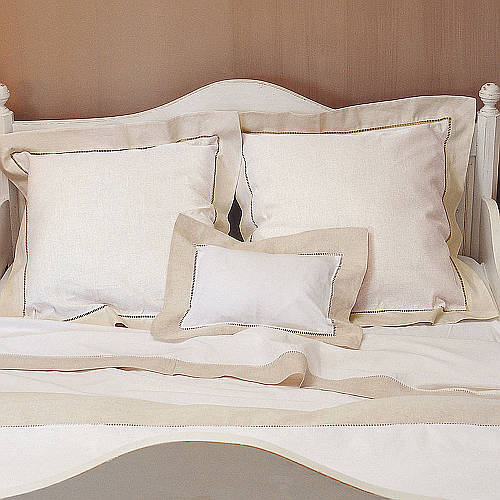 Paris fine linens are made in a two-tone linen/cotton with Venetian lace hemstitching, a signature decorative detail of Alexandre Turpault.  Hemstitching is a centuries old needlework technique that never seems to go out of style.  This classic bedding of cotton and linen blend retains its wonderful soft  hand over time with relatively easy care.  Available in white/natural, the duvet cover, flat sheet, and shams evoke the French elegance so often seen in quality bed linens.  Known as masters of linen-weaving since 1847, Alexandre Turpault is passionate about the fine craftsmanship and quality finishes that go into producing their line of fine linens and bedding. 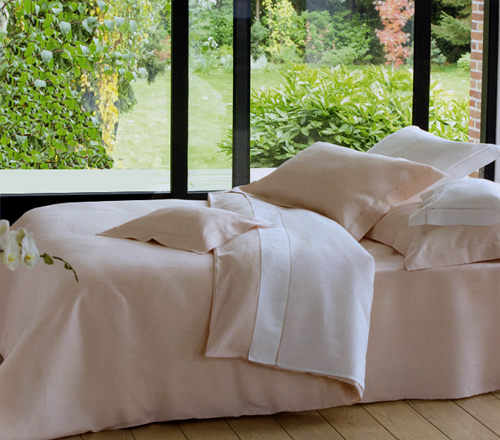 Cythere bedding from Alexandre Turpault is made of 100% linen.  Linen is thought to be one of the oldest textiles in the world with a history that goes back to ancient times.  Several properties that make linen ideal for bedding is that it feels cool to the touch.  It has minimal initial shrinkage and it gets softer the more it is washed.  Linen doesn’t pill or produce lint.  As a great choice for bedding in warmer climates, it absorbs and loses moisture very quickly. Offered in solid colors and hemstitch details, Cythere linen duvet cover, flat sheet, and sham colors include White, Cream, Natural, Nutmeg, Denim, and Pink.   Made in France. 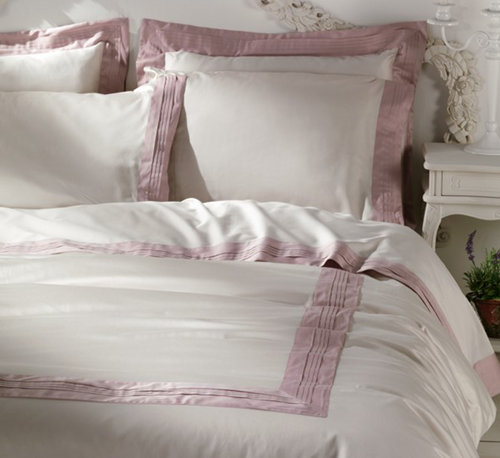 The Allure bedding collection from Cottimaryanne will entice you to have a romantic getaway right at home.  A luxurious 4 pleat detailing on the duvet, shams, and pillowcases gives this 450 thread count bedding a soft texture and sophistication.   Allure is offered in two colorways and may be purchased as a sheet set with a flat and fitted sheet and 2 pillowcases or as a duvet set, which includes a duvet cover and two shams.  Now, turn the lights down low, light a few candles, and snuggle under Allure for a romantic evening. Sweet dreams are almost guaranteed. 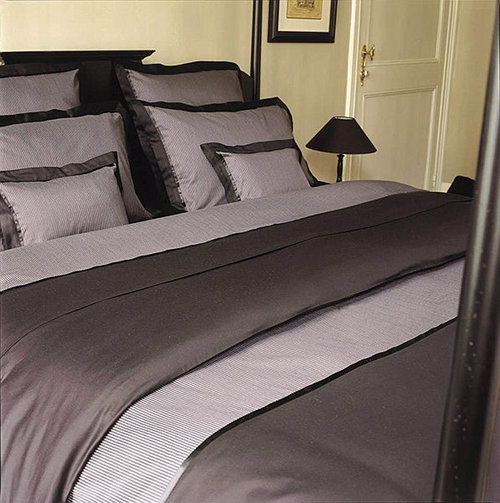 When it comes to the Gatsby bedding collection by Alexandre Turpault, we can’t help but think of that great novel, “The Great Gatsby” by F. Scott Fitzgerld.  The novel was set in the 1920s, a time when jazz was the craze and men wore double breasted suits.  This 300 thread count 100% combed Egyptian cotton printed sateen with pinstripes, solid border, and satin ribbon details surely was inspired by men’s fashions of the time.  Available in three colorways: Black, Mink and Snow, the collection includes a duvet cover, shams, and flat sheet.  Gatsby is the perfect masculine bedding with contemporary styling. 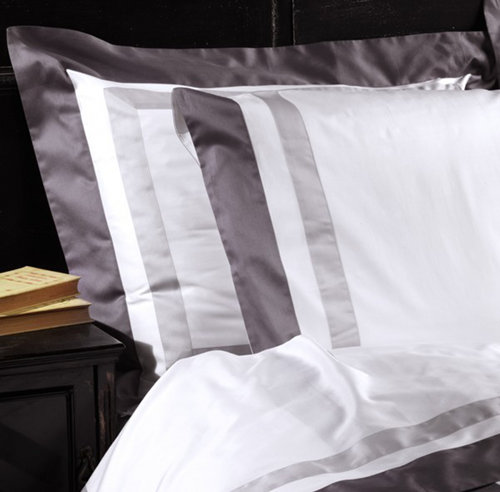 Mistral bedding by Cottimaryanne is a 100% Egyptian cotton sateen with a 450 thread count.  The double contrast banding (one light, one dark) on the duvet makes this ensemble a great alternative to plain sheeting.  It’s offered in two colorways:  White with Pearl Grey and Ash banding or Ivory with Mocha and Chocolate banding. Shams mirror the banding in the flange and inset border.  This collection is sold as a sheet set with flat, fitted, and cases and as a duvet set with duvet and 2 shams, both of which are available for immediate shipping.  Additional components such as pillowcases, shams, and duvets may be purchased separately from our special order program.